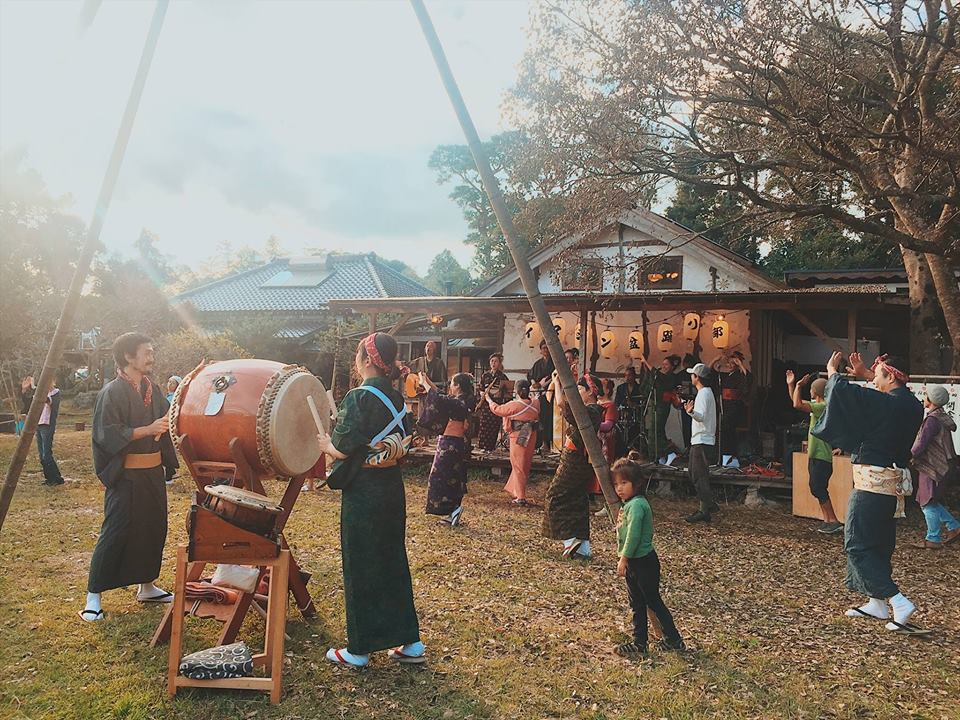 This time last year, I was waiting at a train station two hours east of Tokyo.

I had just taken a cab with two other Vipassana camp participants after our camp. We said our goodbyes and I waited for another two who said we’d meet for some coffee at the station before heading back into town.

15 – 20 minutes later, the two of them turn up in this little white buggy of a car. Waving, and windows rolled down, “Hey hey, we’re going to this really cool farm-to-table cafe that Yuriko is offering to take us. Would you like to go too?”

“Sure!” I had no plans for the rest of my time in Tokyo so roadtrip/adventure? I’m in!

My big fat suitcase just managed to fit into the trunk, and I squeezed into the back seat and off we went. The five of us didn’t know one another, but had ‘slept together’ the last 10 days at the Vipassana camp.

At the wheel is Yuriko. She’s a local. A total nutcase who travels the world, India, different parts of Japan on her own exploring the world. Winding through roads of her hometown, we get to Brown’s Field.

Something was up though – there was some little stall set up, a scattering of wooden chairs are propped on the grass field, and some people were testing mics and amps.

It might have been Yuriko who went up to find out what’s going on. She turns to us saying apologetically that the cafe was closed for the day because of a special event. Oh….we thought. But then someone of the organisers asked, “Instead, would you like to join us for the Harvest Party?”

Of course!! We lucked out!

Checking out the Eco-village

On paying a nominal entrance fee, we were each handed a slip of paper to cast our votes later. We milled about as they were still setting up. Off to stage right leads into a forest area. “Hi, goat!” There was a goat hanging out there nibbling away. Just to the side of the stage, a lady has brought her clean hippie-esque fashion line for sale.

Where we found ourselves was no ordinary farm-to-table cafe. It was an Eco-village founded a few decades ago by an American photographer and a Japanese lady. She was at the festival too. A lady probably in her sixties – a chic lady in kimono and a head scarf, she was surrounded by lots of young people, mostly friends and guests, like a big neighborhood community. Brown’s Field offers lodging and also farming opportunities.

A little stall was set up vending packets of locally grown rice, pickled fruits for teas and other seasonal items from the farm. Another stall served drinks alcoholic and virgin.

Lunch soon was served. It may have been the world’s best-est spread ever. Not your fancy caviar blinis, nor your assorted cheese. This was a spread of products of LOVE, fruits of the earth.

My guess is those who came for the party at Brown’s Field were naturally more drawn to a natural/eco lifestyle. And as Japanese moms have a penchant for out-doing themselves when it comes to packing lunches – this was no different.

Not everyone brought their dish in the fanciest ware, but they were all presented beautifully. What caught my eye most was some of the lacquerware used – roomy square boxes stacked.

As we were at an eco village, we didn’t use disposables, but handmade pottery plates, pottery mugs, and chopsticks. Each itself unique.

While we sampled the array of food as we sat on the grass facing the stage, the music started to amp up. I was especially moved by a lady’s singing. It wasn’t perfect, but it was very heartfelt. As I later learned, she had only began taking singing lessons a few months ago. And what you’d never had guessed – she had three kids in tow including a little baby who was held by his eldest sister!

Everyone – kids, adults was dancing to music when the funky sing-song group Oh My Genmai came on to which the mom was also a member.

Japan has many particular things and one of them is anthropomorphism. Like putting a smiley face to inanimate objects, and giving objects human traits. In Japanese TV ads, one wouldn’t be surprised to see a smiley tomato and carrot putting on a dance to promote a vegetable juice. So Oh My Genmai does the same. Genmai (玄米) is brown rice. When the OMGs come on stage, every member except the lead singer wore a cardboard cut-out of grain of rice. Their faces in the centre – an animated grain of rice. They’re fabulous – they got everyone groving – you should have seen the adults AND little kids dancing and clapping along. See them in action:

I am not sure this would have been possible in Hong Kong. In Hong Kong, these events attract mostly the young below-thirties crowd. At Brown’s Field, it felt like village gathering. There were young ones, but there were lots of families with kids, and also older couples as well. Everyone was welcomed.

The kids loved trying their hand pounding glutinous rice dough – a traditional ceremony. The adults gathered round chipping in to help dole out pieces and others helped made mochi with filling.

Sharing the love, the craft

It was time to cast our votes. Everyone who brought a plate had written on a small tag their name and the name of their dish. Although there were so many spectacular dishes – Japanese, western, middle eastern, you name it; I voted for a sweet potato dish. It was so simple, yet the way it was cut, and the way it was cooked meant the root vegetable’s sweetness and texture shone through.

The festival didn’t just end there. Throughout the eco-village, small stalls were set up where artisans have set up shop selling trinkets, shoes and pottery. An artist took up the attic and encouraged guests to interact with her art or sit on the wooden floor with her for a chat…

Again thanks to the girls for the generosity and sharing the love. It was an eye-opening heart-felt experience at the Harvest Festival. Arigatou Anri, Sae, Yuki, and Yuriko san.