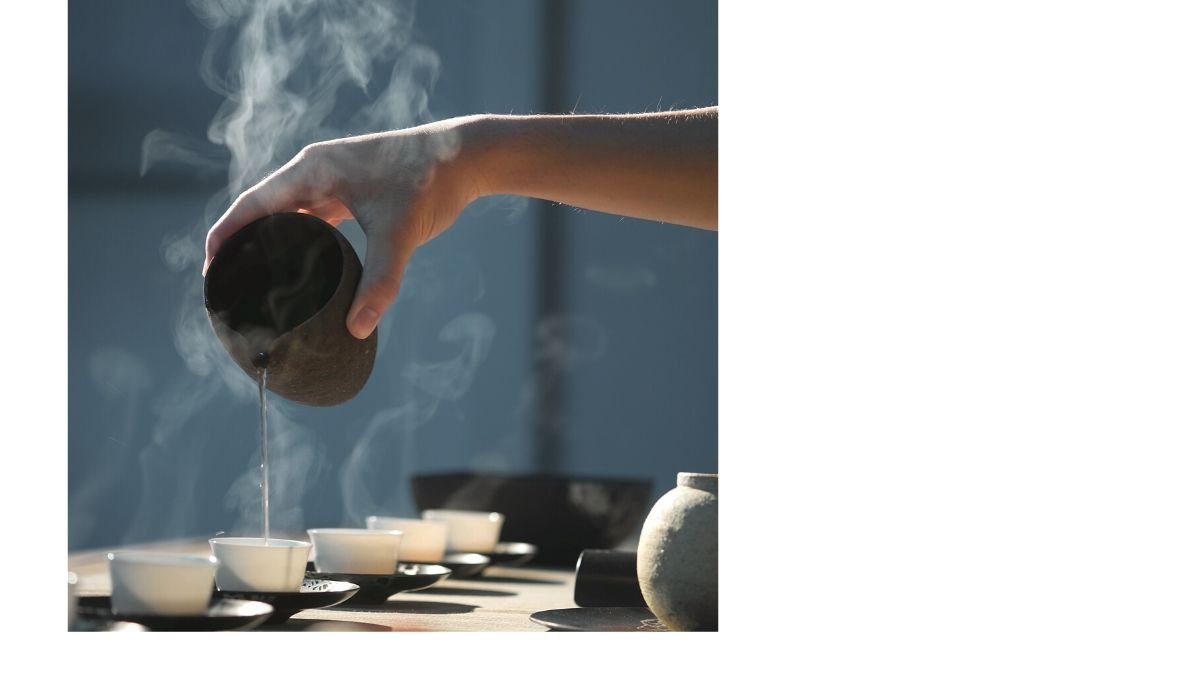 Chinese tea drinking is simply about the taste of teas, I was once told. Whilst Japanese tea ceremony aims to cultivate the person as a whole.

Is that the case?

China is the birthplace of teas. Tea comes in many colors – to help remember, I was taught to remember the traffic light and the panda. Ie. the red, yellow, green and black and white to cover the full spectrum of Chinese teas.

Chinese tea is prepared and served on a wooden/bamboo work station. The station, like a stage with holes or slats drain excess water when fresh hot water is poured over cups and utensils. Guests sit gathered around the table whilst the server prepares the brew. The tea is brewed in mini clay pots or small tea bowls with lids. As the pots are small, the small servings of tea is poured into a sharing jug. After several brews are collected, the tea is shared amongst the cups. It can be a quiet affair, yet it can be a casual and relaxed affair. It can be meditative, and it can be convivial. It’s free-flowing.

My first encounter with Chinese tea prepared this way was when a friend brought me along to her qi gong practice. At the private gathering, one woman served tea. It was said the tea this former dancer and now tai-tai brewed was extra smooth, extra flavorful because she utilised Qi (energy) in preparing it. She was calm and at ease preparing the tea, her movements and demeanor graceful.

When every student has the same water, same equipment, same coffee at a coffee brewing class, how come the coffee comes out all tasting different? Some might say it depends on how well one handles the water temperature, the drip of the water. True for beginners perhaps. But when the brewer has reached a certain level of proficiency, it boils down to the Qi (energy) of the one who brews. The more relaxed and at one the barrister is, the smoother and flavorful the coffee.

They say there are so many paths to the Tao. Or so many avenues to practice – whether through tea, through archery, through running – one can cultivate one’s inner calm, inner peace and qi.

The four arts and cultivation of the self

Chinese tea drinking isn’t a standalone ‘art’ or practice, but very much part of the every day enjoyment and awareness.

With a wealth of understanding in the physical and the subtle bodies, the qi, and the application of herbs and foods to balance and strengthen the body, tea for the Chinese is a medicine, drank for with awareness of its synergies with the body, before taste. Someone might love a good Tieguanyin (Iron Guan Yin), but if the stomach is not at its strongest, a rounder Pu’er may actually benefit the condition rather than aggravate.

Traditionally, there are two streams to which one cultivates the self: the scholar or the martial artist akin to the yin and the yang – the quiet and the active. If you have mastered both, then you’re top of the world.

For the scholarly, there are the four types of the arts practice, namely be able to play the Chinese zither, play chess, write calligraphy, and paint. (琴 – 棋 – 書 – 畫). Notice there is no mention of any tea practice however – yet it would have been a prominent presence in all these art practices.

What are they cultivating in these arts?

Music is a type of expression – lively and responsive to the mood of the gathering as well as others performing together. A great performance is when all the musical instruments listen out for each other, playing as one. That takes collaboration, teamwork to create harmony and balance.

The chess of Go is a game was played only by those army generals and those in training. When I took  introductory lessons, I was fascinated by how strategic, yet philosophical the game is. The foundations of the game were built upon chess piece formations and their corresponding poems, each imparting various understandings of almost cosmic patterns and strategies. It is a world of its own.

Although the computer AI AlphaGo defeated the top Go player in a highly ground-breaking game, while the computer won, I wonder if there was any cultivation of the machine. The machine could get smarter from self-learning, but perhaps not more cultivated.

書 Calligraphy – the humors and flow

Being able to have a “good hand,” ie good handwriting is prized as the writing  used to be a tell-tale sign of the person. (I say used to as the younger generation grew up typing, and consequently, their handwriting is not so practiced)

I once remarked to a friend, “I’d love to study with the person who wrote this (calligraphic script).” To which my friend said, “Oh, it’s actually a Rinpoche.” (An esteemed Tibetan Buddhist teacher) Who teaches Buddhist philosophies rather than calligraphy! His handwriting conveyed how he was.

To prepare for calligraphy, one grinds a rod of ink on stone with a little pool of water – to collect the senses and quiet the mind. How well one writes has much to do with how at peace one is. The clearer the mind is of distractions, and the more focused, the easier it is to hold the space and complete a flowing scroll of text. There’s a lot of Qi involved. I remember as a kid learning, the teacher stressed how we must link the Qi of the brush stroke “in air” so the strokes of the characters link together by the invisible movement of qi. Likewise the characters each link to one another to create phrases that in turn link together to create the full piece of text. It’a almost like doing a floor gymnastics routine, only that the rhythm, flow, and articulation are inked onto paper.

A major difference in Chinese vs Western paintings is the size and scale of people. In traditional Chinese paintings, the majority of paper space is of natural landscapes. Like a game of Where’s Waldo, one might manage to spot a little human figurine under a small gazebo on the side of the mountain half camouflaged by mist. As a kid sitting looking at some of these paintings at restaurants, I could stare at them forever, piecing together the story of the scene as they leave much to the imagination and for discovery. A short poem on the painting serves as guide taking the viewer deeper into the painter’s imaginary world.

Classical Western paintings on the other hand are about realism and the people play center stage. There’s been a lot of development on perspectives, light and shadow (whereas there is no shadowing in traditional Chinese paintings). The paintings are painted on upright canvases where the painter tries to create an exact replica of the subject on the canvas. Whereas with Chinese scrolls, they are painted flat on long tables – quite a bit might have been from the painter’s imagination and sense of his/her surroundings.

The joys of Tea

I recently went to the launch of Tea is for Everyone and when one of the writers was asked what she got most out of her journey putting together the book, she said it was great to see and know there is no ‘set way’ to enjoy tea. The farmer enjoyed it like easy every day beverage, connoisseurs can enjoy it however they like.

To understand how they primed AlphaGo to play against the top Go player and the aftermath, watch AlphaGo (2017) on Netflix. Gripping documentary.

Harmony is like singing in a mixed part choir, standing mixed with other voice parts and listening to each other to create one harmonic voice.
What’s yours? Did you know early on or did you find it along the way?
When we say Yes to opportunities, we open to Magic to do its thing.
Celebrate the milestones big and small 🎉
Qi
karma - Paying forward or Paying back
I surprised myself watching this.

Harmony is like singing in a mixed part choir, standing mixed with other voice parts and listening to each other to create one harmonic voice.
What’s yours? Did you know early on or did you find it along the way?
When we say Yes to opportunities, we open to Magic to do its thing.
Celebrate the milestones big and small 🎉
Qi
karma - Paying forward or Paying back
I surprised myself watching this.