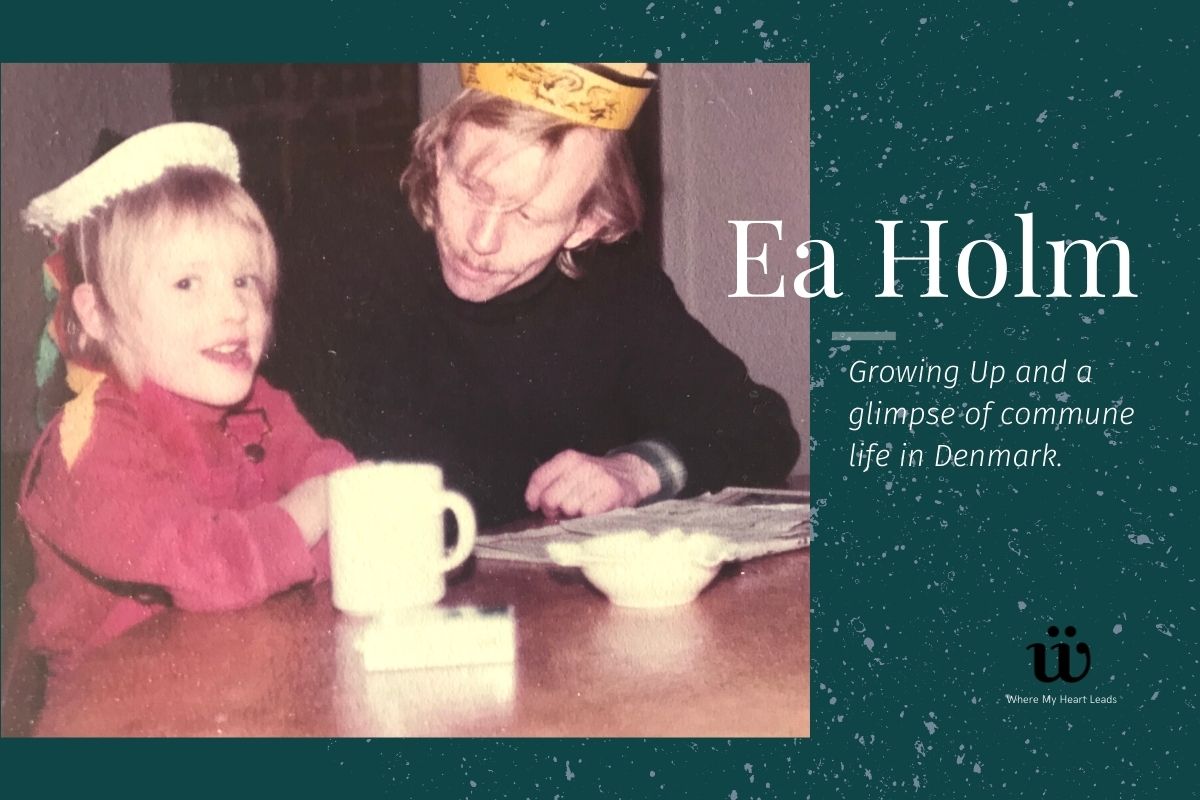 I had always been intrigued by what it was like growing up for Ea for her to be so intrepid and adventurous.

If you haven’t already, check out Intrepid Real-life Ninja: Ea Holm where Ea shares her journey with us – how she “fell into” body work, one thing led to another as she pursues creative expression and satisfaction to her work. Key take-ways too on handling grief of losing a beloved pet.

Karen Tsui, Where My Heart Leads

From our conversation, it appears that the value systems and social systems in Denmark affects a different relationship in parenting and family life.

Is growing up in Denmark quite different? I feel like in Asia, a lot of the family, the kids, the thing is much more binding in a way?

It’s sort of like your parents – my parents wanted for me to enjoy life to find something to do that I would enjoy that I’d be happy doing. So there was never any pressure of like, you should take this, you should do that.

My dad was a little bit was just sort of like, just get a good job, you know? But he didn’t mean like, you have to be a banker or a lawyer or something. He just like something that will be fulfilling – that was important to him.

And my mom was just like, “As long as you’re happy, I’m fine whenever you want to do.”

I would say so.

So first of all, I feel like here (in Hong Kong) there is the fact that the kids take care of the parents when they’re older. So there is a little bit of an investment in it in your kids.

So the whole monetary investment that’s kind of built in is just not there. You don’t have that pressure of, “We paid this much money for you to go to school. So you should…” you know?

And they can’t also be like, “You should be a lawyer or a doctor, because otherwise who’s going to look after me when I’m old?” It’s like, well, the government is anyways, so. The pressure is just off. You can just focus on other things.

How do you feel that kind of childhood or kind of growing up experience informed you as a person?

I’d say, I definitely had a sense of freedom that I could do whatever I wanted. And I wasn’t scared of almost anything. I just was like, “Oh, I can handle most things.” That was probably the main thing that I got from home.

Is it specifically to your family, or that’s generally the case?

I think compared to here, it’s more the case in general, but my family was a little bit extreme like that as well.

It was a little bit like I was a child of hippies.

So I was just like, “Whatever you wanna do…” So like, Denmark is definitely more like that, but my family even more so on the extreme side.

Um, a little bit. So my mom and dad actually split when I was one. So when I talk about my family, I talk about them separately.

My mom was just very free spirited. She had four husbands, though she wasn’t married to them throughout her life. And we always had the attitude that, you know, men come by to teach you different things. And then you find another one, you know, so very, very open-minded like that.

My dad went to live in a commune when I was five. So I grew up from five to 10, in a commune, and there were a lot of naked people. So the nudity thing – yes it was there, it was very common for people to just walk around without clothes on. And it really wasn’t a problem.

Yeah, weed was growing in the garden, people were just having a good time.

How do people make a living in a commune?

They had jobs, they just all lived together in a really big house. And then you pay part of your income to the communal fund.

So they had actual real jobs outside.

They had jobs outside, but then they just lived in this way. And so it was a lot of single parents.

Basically, I feel like it wasn’t so great for us kids, because we weren’t really part of a family unit.

We were sort of in one big room with bunk beds together. And then all the parents were like, sort of having a good time, but not really noticing if anyone was looking after us.

So it was in a way a really great concept. I can totally see that instead of having all these single parents live alone with their kid. Then the kid can have other kids to play with, And the parents can have other adults, so they don’t go crazy. But at the same time, it could have been maybe managed a bit better.

What were the values of the commune? Are there things that you see from the commune life that you’re like, “Absolutely, that really doesn’t work, that shouldn’t be.”

That idea of like, “Oh, it’s great for them to be all together. They’ll just be like a big, like a big family” is not so right. Like kids of that age can be quite into hierarchies. And, you know, clique bullying and stuff like that. Nobody really saw or noticed anything going on. So that wasn’t so cool. But I did like I’ll say, there was a lot of sharing, like you cook together. So you had different people had cooking days at different days, and then everybody would eat together. And so you learn to cooperate. You learn to work together, you learned community. There was a lot of good things as well. Yeah, you learn to share.

So there’s community like with the idea of community, yet within the kids there is the hierarchy?

Yeah, within the kids. It’s like you really need parents to step in and say, “Hey, this is not how we do it.” And they were too busy with each other. The parents – they weren’t really paying too much attention to us. So I think they just thought we were just happy. But it was a bit tough sometimes being a kid there, I would say.

How big is a typical commune? Or is there no typical size?

Ours was quite small. I think probably, maybe 10 parents with 10 kids living together living in one big, old, old house. I don’t know how they did it if they actually bought it and paid the mortgage together. Or if they paid rent for it. I’m not sure how that was done. But I know that it’s still a commune today that house, but now they have actually changed the format to what I think is better. Now the kids live with their parents within the house. So they have built many smaller rooms rather than what we had. So I think they have actually fixed the things that weren’t so good in my time.

Photo of Ea and her Dad at around the time they moved into the commune, provided by Ea.
Date of chat: Saturday, February, 2021 over the internet.

Happy Thursday.
#sparkjoy ain't #minimalism
Chance encounters.
Are you practising using your intuition? came a message from a senpai friend this week.
"Is this good or bad?" I asked.
Is the "American Dream" of multi toilet mansions giving us joy? Or is it part of a ploy to get us consume more? What then, make us happy? What enriches our lives?
Flow - with it or against
Here're some simple changes I made to remove distractions and get more focus back. So I could do more deep work.
“Your potential is directly correlated to how well you know yourself. Those who know themselves and maximise their strengths are the ones who go where they want to go.”

When Pain Just Disappeared I Knew I Wanted to Check Out...

Happy Thursday.
#sparkjoy ain't #minimalism
Chance encounters.
Are you practising using your intuition? came a message from a senpai friend this week.
"Is this good or bad?" I asked.
Is the "American Dream" of multi toilet mansions giving us joy? Or is it part of a ploy to get us consume more? What then, make us happy? What enriches our lives?
Flow - with it or against
Here're some simple changes I made to remove distractions and get more focus back. So I could do more deep work.
“Your potential is directly correlated to how well you know yourself. Those who know themselves and maximise their strengths are the ones who go where they want to go.”